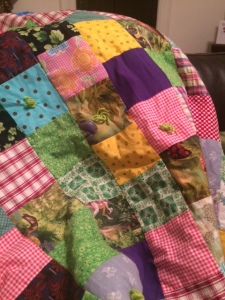 I have a confession to make.

Patterns, maps, guidelines, recipes–you name it.  If it has a certain way it should be done, chances are I have not done it this way.  Usually, it’s not anything major, and it’s not like I do this for any important reason.  I’m not trying to “stick it to the man,” or prove my frontiers-woman spirit.  No, mostly it’s because I just can’t be bothered. In my mind, it legitimately seems like less work to figure it out on my own as I go along than to take the time to look it up on youtube.

It usually happens like this: I see a [skirt, cable-knit hat, flower arrangement, gift basket] and say, “I bet I can do that.”

Because of this boundless belief in the power of creativity, I have made my own sewing patterns out of brown paper bags by tracing around myself.  I have knitted hats by looking at one, knitting for a while, then holding up what I’ve done to the one I bought.  I have (no joke) given myself first degree burns hot gluing myself into costumes.  But don’t worry.  “I’m sure I can figure this out.”

Take, for example, the quilt I’m wrapped up in right now.  It is a quilt in only the most general of senses (no intricate stitchwork here–it can only qualify as a quilt because every four squares or so, I sewed little x’s of yarn through the layers.)  I made this quilt because of one just like it that a family friend made for my brother.  I snatched from my parents’ house and took it with me to college–no one has ever commented on its disappearance.

I can still remember the day when, randomly, I looked at that quilt and thought “I can do that.”  So, with nothing but the quilt and my conviction I could figure it out, I went to the store and bought a bunch of arbitrary pieces of fabric.  I measured the basic size of the quilt by holding it up to my arm (I couldn’t be bothered with a tape measure.)  Then I cut out the pattern for the squares (again, out of a brown paper bag) eyeballing it from the original.  I didn’t piece it together the way you’re supposed to (one at a time–making four small squares into a medium size square, then four medium sized squares into a big square, and so one.)  I sewed a bunch together in huge strips.  Half the time I didn’t even pin them first (again, too much work.)

As a result, my quilt wasn’t perfect.  The squares didn’t all line up in perfect rows and columns.  Some are a little off-set.  You need to know that I can be a total perfectionist.  But I also didn’t really want to have to rip everything apart and re-piece the stupid thing. I really thought about it–Perfectionist Me warring with the inner-pragmatist that thought, “Does this really matter?”

In the end, I decided that it was okay for my quilt to be not-perfect.

Now, before you decide to hate me for accepting mediocrity, give me a chance.  Anyone who knows me knows that I like to do things well.  I demand a lot of myself professionally, I demand a lot of my students.  I work hard.  I am ambitious.  However, I have also learned that if you have to have every little thing exactly “so,” you will not only lose sight of the end game, you will also drive yourself insane.  We can learn a lot from imperfect experiences.

I work hard to impress on my students the idea that not-quite-right final products mean we’re on the road.  That what we learn from the failures, the flops, the funny looking hat, the out of tune chord, the not-straight quilt are all stops along the way.

I have learned a lot by doing it once, deciding it doesn’t work, tearing it out and doing it again. Sometimes, it’s worth it to me to re-do it–because it’s something that’s important.  Sometimes, I decide that the little foibles of whatever I’ve made are not worth the effort–and that’s okay, too.

We have to decide which seams are worth ripping out and trying again.

Published by Rice and Coffee

Life is crazy. And busy. And frantic. And two years ago, I stepped back and looked at my life and thought, "It has to be better than this. I can do better." Armed with the belief that God didn't intend for us to live like frazzled robots racing constantly to the next thing, next purchase, next appointment, next whatever, I have decided to fight the system. I am making a bid to take back the simplicity and kindness that the world says is impossible to have. Join me on my journey! View all posts by Rice and Coffee

4 thoughts on “Stories of a Not-Quite-Right Quilt”

While you were out

Looking for something specific?

© Emily Donaldson and Rice and Coffee, 2016. Unauthorized use and/or duplication of this material without express and written permission from this site’s author and/or owner is strictly prohibited. Excerpts and links may be used, provided that full and clear credit is given to Emily Donaldson and Rice and Coffee with appropriate and specific direction to the original content.